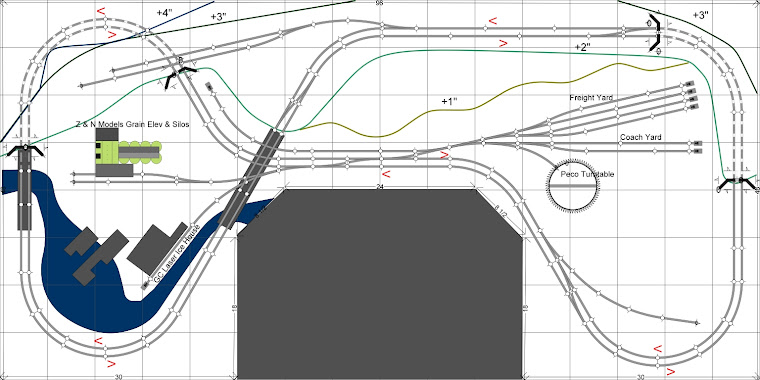 As our move in date gets closer and the construction debris is cleared from the basement, time to resurrect the Z scale layout. 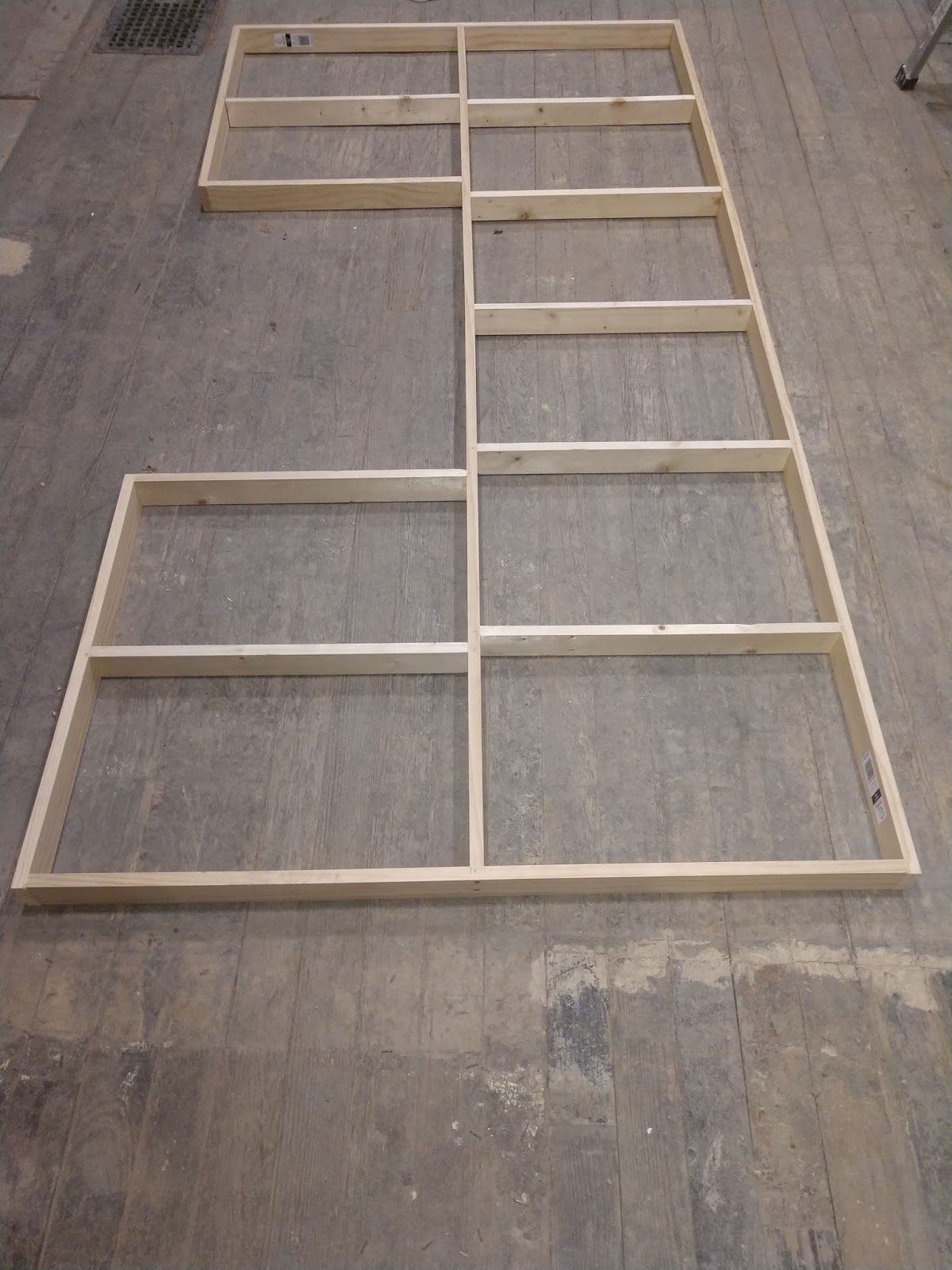 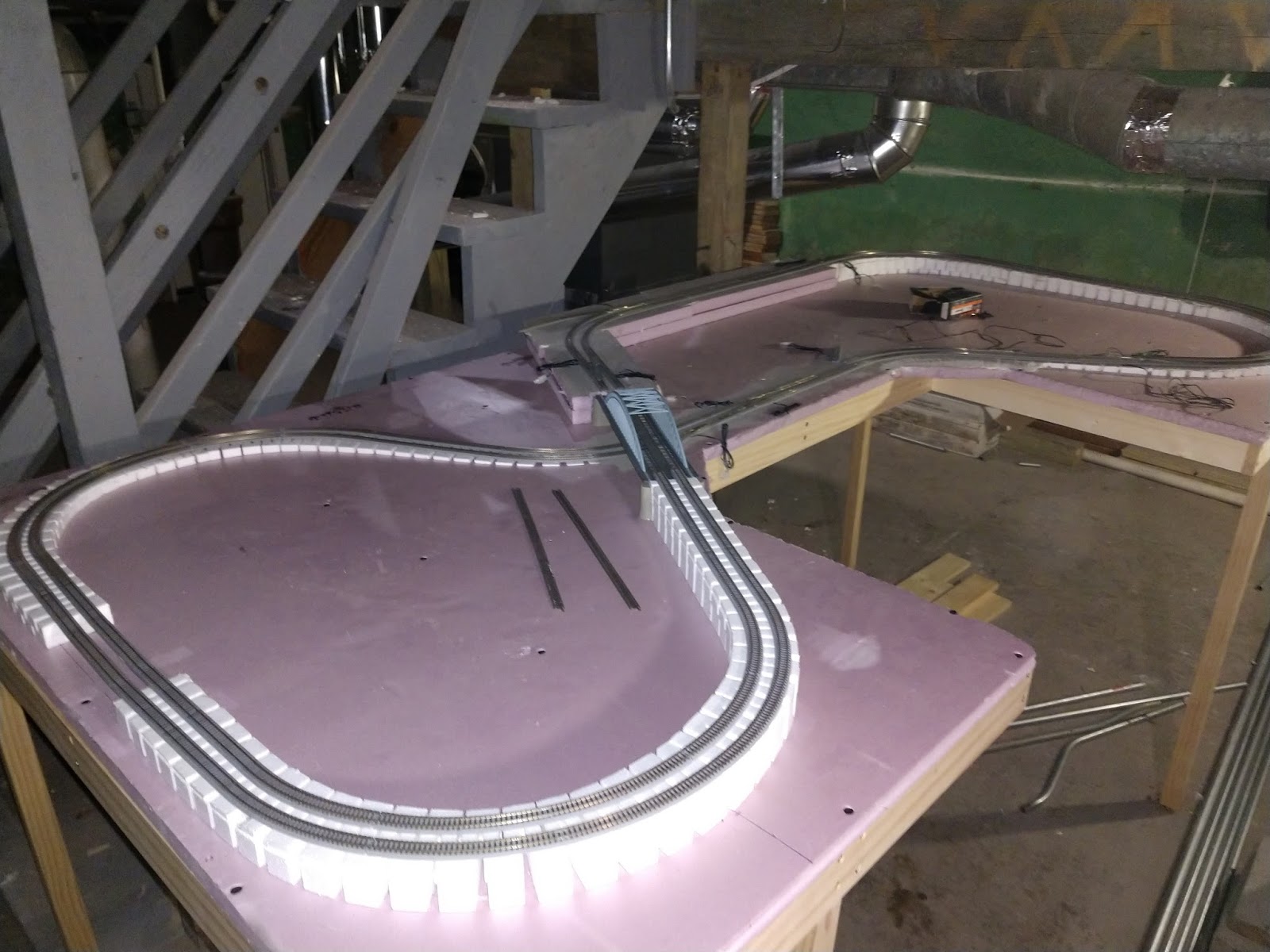 I have the mainline up and running, a lot of the structures are built, so I guess the sidings need to be laid and then I can start to scenic the layout.
Posted by Dave at 4:11 AM No comments: 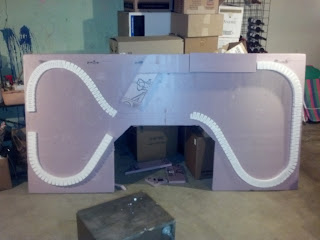 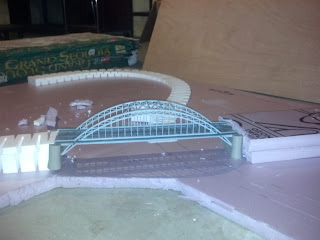 Sorry for not being very good at keeping up with this, maybe I've got to much going on but I wouldn't have it any other way!

At a clients request, I took Wood Scenics, Scenic Ridge and converted it to Z using the Rokuhan track, I thought I'd share it with everyone. The clients version I have tweaked a little to meet his other requests. 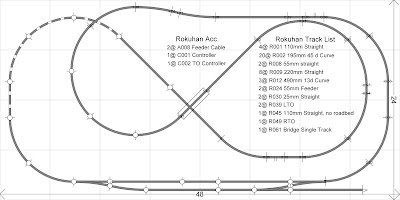 Something New in the Works!

Hey All, sorry about the long spans of time between posts but its the same old excuss, been busy!
Whats new, well for starters '27 Squares' has been put on hold, yep, the single reason, no space!
I have been working on another Z layout and its half the size, 48 inches square, take a peak; 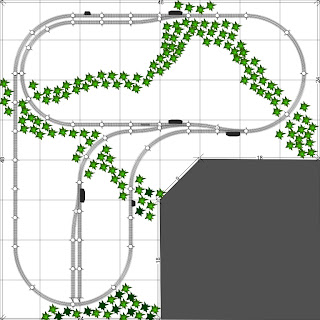 Its all MTL track and is up and running.
Also new, is all the structures are cardstock, huge learning curve and I will admit that Staples and I have become very close. The two producers of models that I've been building are 'Z&N Models and Scale Scenes, two great sets of people to work with! If you haven't tried cardstock models give it a whirl and you discover a whole new respect for paper, LOL. Here a couple pictures of whats been built; 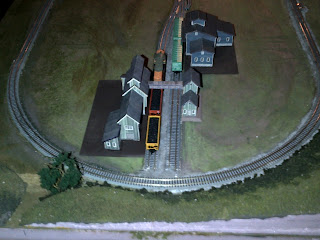 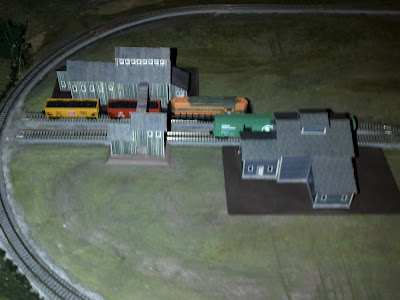 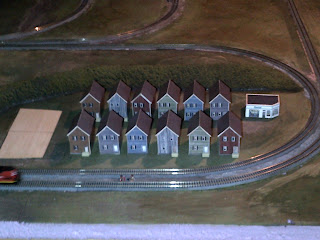 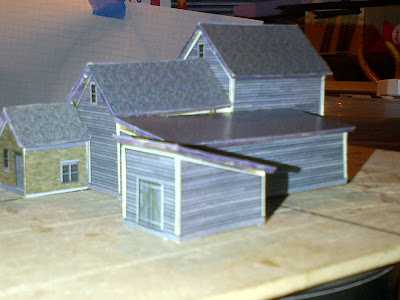 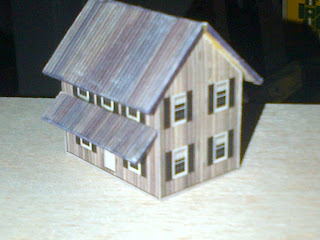 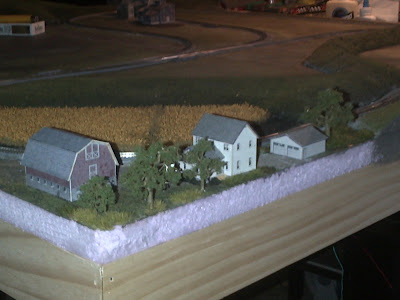 Those are all Z & N Model's kits, very cool building system.
For those of you on Facebook, this whole build is there also, just go to my pictures, the file name is Great Northern in Z, there about 80 pictures and I'll add more here next time.
Thanks for looking, back in a flash!!!
Posted by Dave at 4:32 PM No comments:

Busier then ever, sorry

I just realized I have when I logged in I have not made an update since Christmas, yikes!
So much going and not enough time to do it all so something had to give and it was this.
there has been progress, not as much as I would like but I guess slow and steady is better then nothing at all.

Here are the 2 round houses that I thought I had completed, then I took them outside for some pictures and BAM, amazing how sun light can crush you. I have left the doors off until they are placed on the layout, then I'll hang them in the open position. They are another fine kit from "Nansen Street Models". Thankfully I hide the wires well enough so they didn't photo bomb me, I installed 2 lights in each structure. 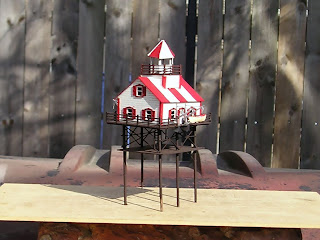 Here is the lighthouse and other then the lighting affects and some touch up it is done also. I did discover while assembling it that MTL only gives you 5 legs, not knowing what hight is yet, I discovered that a round tooth pick was the perfect subsitution for the 6th leg.

I think thats about it for know, other then late May / early June has hit Chicago. The skies are clears, a nice SW breeze and its 80 degrees.

Until next time, everyone enjoy.
Posted by Dave at 2:10 PM 1 comment:

Heya, sorry for the long absence but many things going on and modeling is part of it!

Any ways, I have started a second Z scale layout on the computer but that will get mothballed for the time being.

I have however been working on an N scale layout, inspired by Trainfest 2011, all but 1 item I had in the house, other then the base. so a very inexpensive project! The one thing I did buy was a backdrop, never used one before and will all ways use them now!

I purchased it from Dave Burgess who owns Backdrop Junction; www.backdropjunction.com, as for me, I'll never buy a backdrop from any one else and NO he does not know I'm writing this!

His web site does not include any Z scale backdrops but he is willing and ready to resize one for you, he told me so in one of the many emails we exchanged.

Take a peak, I know its N scale but still its awesome.

OK, back to Z, did I tell you that the round houses came in and have been built? I got 2 of them from N Scale Architect, nice stuff! I also did receive the MTL Lighthouse, before Trainfest. I did have a chance to see the completed model at MTL's booth and from that completed model, I'm thinking MTL needs to resharpen there pencil and double check the measurements. Same great quality I, we have come to expect from MTL but its HUGE, I asked the MTL guys at the show if was N scale and they assured it me it is Z, my blog, my comments, my thoughts. LOL

I know there is tons more to tell you all but it just doesn't come to mind right now.

So everyone, a Merry Christmas or a Happy Holiday to you all and here's to a Great 2012!
Posted by Dave at 9:03 AM No comments: 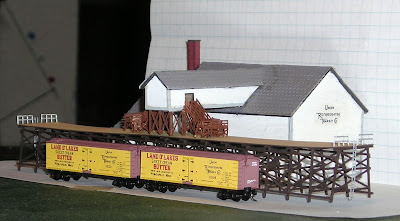